In the two years that it took for the Brattleboro Museum & Arts Center (BMAC) to curate the current exhibition “Up in Arms: Taking Stock of Guns,” an average of 200,000 people in America were shot in murders, assaults, suicides, suicide attempts, accidents, or by police intervention.  About 67,000 of those people died on the wrong side of the barrel of a gun.  (View Reference Statistics Here)

And as history would have it, horrifyingly apropos as anything, the opening of this exhibit, which aggressively and artistically explores the complex concepts around the use and regulations of guns, was on June 24th.  The opening was less than 2 weeks following the most deadly mass shooting by a single gunman in American history– the massacre at the Pulse Nightclub in Orlando, where 49 people were murdered, and an entire nation was shell-shocked by such a senseless act of hatred and violence.

The timing could never be more right or more unfortunate.  But in a country where mass shootings are increasingly more of a reality, and a daily source of anxiety and debate, it seems the fates had it that while walking through the Up in Arms exhibit, the viewer would not only be able to view these ARTworks in the vacuum of a museum for contemporary art, but to also have the experience framed by the greater context of their national community which is grappling with a major gun problem, RIGHT NOW!

This is not theory.  This is current events. 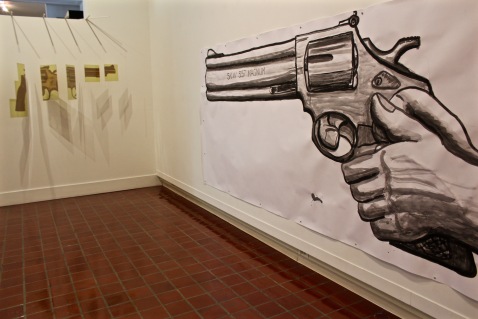 Madeline Fan’s ink painting of a Magnum, pointed toward her mobile of dangling panes of plexiglass.

The instructions for the interactive exhibit by Madeline Fan, for viewers to take a selfie with the Magnum.

I was immediately confronted by very strong imagery of guns in various mediums; ink, graphite, gunpowder, packing tape, porcelain, photographs, paint, and more.  The range of creativity was unreal, and the level of skill and vision were through the roof.

I stopped at the eye-catching ink painting/selfie generator, “Shooting Gallery,” a work by Madeline Fan, and just as I was groaning that I don’t have a camera phone to set up on the tripod to engage in the “gallery” part, I saw a woman adjusting the exhibit.  I asked, “Is this your work?”  She said yes and asked if I had taken a selfie.  My groanings of only having my Canon DSLR continued, and Madeline graciously offered to use her camera phone, and to send the photo to me.

So I positioned myself in front of the over-sized barrel of Madeline’s Magnum, and imagining a magician’s toy-pistol unexpectedly popping a carnation out of the gun, I grabbed that same energy and gave the barrel a kiss.  I didn’t kiss it because I love guns, quite the opposite.  It felt like giving a killer a hug because their life must have been so unbearable to manifest itself in murder.

It was a moment of compassion, and I am thankful to Madeline, who is a local ARTist who lives in Brattleboro, for offering me that space to see myself interact and respond genuinely to a really big fucking gun.  My actions surprised myself, and the person I saw in the mirror was one I am proud to be. 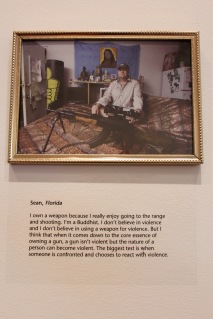 A single photograph and quote, of Sean from Florida, included in Kyle Cassidy’s photographic contribution. 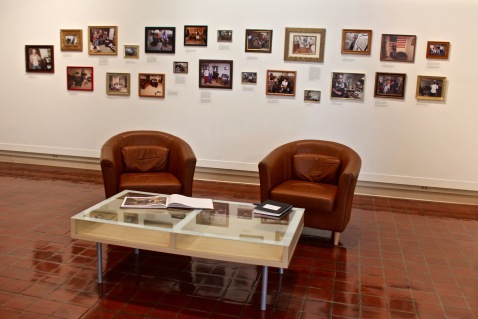 Portraits made by documentarian Kyle Cassidy, showing myriad American gun-owners in their homes with their families and their firearms.

Walking from one part of the exhibit to the next, I felt many varying emotions regarding what I was being presented with.  By far, the most time I spent was at Kyle Cassidy’s portraits of Americans at home with their families and their firearms.  I would scour the images and read the quotes, constantly searching for something to relate to.  Although I am not a gun-owner, I knew that the people in the pictures were no better or worse for their decisions to own 1 or 100 guns, they were just human like me, and connections were not hard to find.

There were so many different accounts of who/what/where/when/WHY, but underneath it all, everything boiled down to freedom and protecting that freedom.  With concerns like that, you almost cannot argue, yet the problem of gun violence persists.  No wonder the debate is so heated in this country right now!

Up in Arms is an impressively crafted and curated work of ART when viewed as a whole, and each piece which composes it stands up as remarkable therapy for the trauma that the American people (and every person in the world) who need the open wounds of terror, fear, and grief, to be healed.  It is so remarkable to be able to sense the fact that these pieces are the direct manifestations of the ARTist’s own healing process. 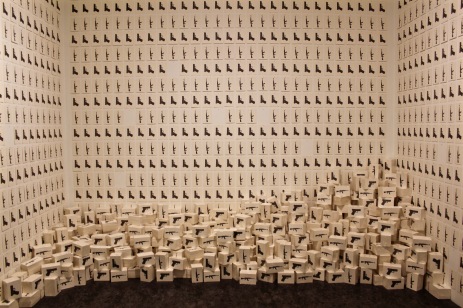 Linda Bond’s epic portrayal of the guns that went missing in Iraq, filling the walls and the room.

From the BMAC’s exhibit catalog, the director and chief curator write, “As presenters of contemporary art, we occasionally find ourselves in a position to facilitate constructive dialogue around vexing social issues. Dialogue cannot take place, however, when one party or another considers the conversation rigged against them from the start. For that reason, we have deliberately omitted from this exhibit artwork that glorifies guns and gun ownership, as well as artwork that is overtly anti-gun. Those positions are already well staked out in our society. If we are ever going to move beyond them and find common ground, perhaps that will start with consideration of the more thoughtful, nuanced ideas contained in the work presented here.”  –Danny Lichtenfeld & Mara Williams  (Visit the entire write-up Here!)

Visit the BMAC’s Up in Arms exhibit, which will be up until October 23rd, 2016.  And don’t forget, admission is free on every First Friday’s Gallery Walk between 5-8pm, as well as Thursday afternoons between 2-5pm!

My greatest thanks go out to each ARTist and to the Brattleboro Museum & Art Center, for refusing to shy away from a painful topic, but choosing instead to share a balanced and fair presentation of how ART can act simultaneously as the mirror and the reflected message.

One thought on “A Museum Up In Arms”